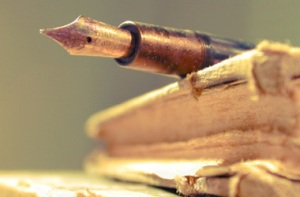 It started in May 2012 with a tap on my shoulder after an author talk at the local library. At the end of the session, I raised my hand and boldly mentioned to the new author, a local fiction writer, that I was an “out of work editor.” She wasn’t particularly interested, but the man sitting behind me apparently was.

Something about the word “editor” must have resonated with the shoulder tapper, who explained that his creative writing group met every Friday afternoon at the library. Would I be interested in joining them? He didn’t exactly say why he’d invited me, but now that the world of academic editing didn’t seem to want me to rewrite (I use the term very loosely) anymore, an invitation to actually write caught my attention. At first, I was only mildly interested in being the token editor in a group of adult nonprofessional (unpublished) creative writers and wasn’t sure  I was ready to join their ranks as a writer. But I decided to try it and find out.

What had begun a year or so earlier as a fiction and memoir-writing group, the project of a creative writing student who had since moved on after graduation, had become a spinoff in which a few people were writing, but many were not. We continued to meet and tried various ways to inspire ourselves to write through DVD courses, in-person exercises, rotating facilitator-led sessions, and the like. I occasionally presented some editor-type input. But except for a few people who submitted writings now and then (at least since the time I joined), this was more a gathering than a group.

Some months later, at a time when most members apparently felt the need for change, we elected a steering committee (of which I found myself chair for a while) and split into subgroups according to writing form: long fiction, short fiction, and memoir/anything goes. Suddenly, these smaller groups—four or five members in each—were actually and enthusiastically writing. And now I faced a double challenge. Wanting to seamlessly transform myself from academic editor to creative writer, I was eager to start writing fiction. But finally finding myself one among other writers, here I was with my purple editing pen ready, but my own writer’s fingers suspended over the keyboard—I was fearful of making the transition. Being the only editor in a group of writers was confusing, creating a dilemma born of the ability to see the value and potential in the work of others combined with the humility—and fear—of finding out what others might see in the work I would do when I finally found the courage to start.

Despite my identity crisis, I began to write and turned in a couple of chapters from my new historical mystery novel and a few sections of a historical mystery novella, seeds planted in unfertilized soil. But unable to remove my tight-fitting editor’s hat, I stumbled over my  efforts, getting in my own way as I wavered between fact-finding and free-flowing thought. Roughly mashing together hasty research and stories with no clear direction because I couldn’t decide on the genre or what I wanted to happen in the worlds I was creating, I realized my yarns were actually twisted balls of threads—but, judging from reactions, evidently yarns with merit, and maybe even a little magic. So much to write, but so much to learn. . . .

As if teetering on the razor’s edge between editor and writer hasn’t been difficult enough, I am still learning the subtle differences between editing in a professional environment and critiquing in a nonprofessional peer setting. Beyond that, I need to understand how critiquing induces good writing. But as an editor-cum-critiquer, how could I possibly stop being authoritarian? Even though I know creative writing has somewhat fluid rules, I can’t not see things that editors are taught to home in on. Yet I know this isn’t exactly what beginning authors are looking for from peer reviewers—they want to create good stories and interesting characters. They seek critiques more than tweaks, impressions more than prescriptions.

At one meeting, I asked my writing colleagues how they thought critiquing creative writing differed from editing it. Someone said these were right- (critiquing) vs. left- (editing) brain activities. This begins to get at the differences, but distinctions remain somewhat difficult to articulate. The repertoire of editorial skills I’d acquired as an academic editor had left me ill equipped to answer my own question—or even to ask it in the first place.

After further reflection, however, here’s what I think I know: Critiquing is not synonymous with editing, by which I mean the hands-on reworking of text, one eye on the details, the other on the whole picture. Critiquing is reacting—not redacting—by asking questions and suggesting other approaches. Yet the two functions have significant overlap, not the least being their primary purpose—to help authors improve their writing. And the fastest way to learn what critiquing is? Submit your own work for peer review.

As a newcomer in a creative writing group, you need to leave your biases at the door and recognize that—unless you are a published author—the others in the room actually are your peers. You can’t stand apart as an editor, as a teacher, or as a competitor. You’re laying bare part of your soul and inviting virtual strangers and incipient friends to comment on it. Remembering what peer reviews were like in my technical writing classes in graduate school, I feel lucky to be among gifted amateurs who haven’t learned or been exposed to the vitriol of aggressive, cold judgments. Sitting in an intimate group of fellow writers talking story, character, and craft, while sometimes tedious and stressful, has been overwhelmingly some of the most fun I’ve ever had.

An editor in a professional situation stands apart from authors and their brainchildren, coolly observing how well the work has been rendered. Being removed makes this kind of work possible, even if one is passionate about the editorial process. (I am not exploring here the various editorial roles one finds in publishing houses, but generalizing based on common notions of what hands-on editing is.) Critiquing in a nonprofessional peer-to-peer setting is more personal, more interdependent. It is also, to some extent, more subjective than editing—critiquers are often blatantly contradictory. Critiquing is also more emotional, dare I say it, and somewhat less cerebral—but no less thoughtful—than editing. Those who critique, unlike those who edit, have more responsibilities to authors’ dreams and fewer rules about how authors express them.

What do writers want from peer reviews? Accolades, of course, oohs and aahs, hearing that the reviewers couldn’t put the writing down—that it made them cry, or laugh, or relate, or change their lives—or, best of all—write better themselves. Short story, novel chapter, memoir . . . it doesn’t matter. Authors want to wow those who read them. Then real life happens. An author might submit something for group review only to be greeted with silent stares—how deflating!—or serenaded with earnest comments about what could have been better—damn, they’re right!

In a supportive environment, authors may feel a bit chagrined when their reviewers seem bemused rather than bedazzled, but they will go home and write better as a result of insightful reactions to their work. Good editing may achieve a similar result, but it feels very different to be instructed rather than inspired, revised rather than reinvigorated, edited rather than enlightened. Hands-on editing puts the final burnish on good writing. Heart-to-heart critiquing fuels the fire that creates it.

My group members and I are not all that different as writers, so we can nurture one another’s talent, expressed or latent, without class distinction. As students of writing, we are self-taught. Amateurs we may be, but in some cases gifted ones. Who knows? We may even incubate something publishable, although what that means in today’s changing world of publishing-house mergers and self-publishing technologies requires a lot of educated guessing and adventurous exploration to figure out.

Having reviewed my group members’ work and experienced their critiques of mine, I am convinced not only of their evolving talent, but of their good intentions. Undoubtedly, whatever I continue to produce as I learn to translate the inner world of my imagination into shared experience through writing will be flawed in some way or another. But in my group, the review process is handled with kindness, humor, and a sense of mutuality. Gradually, this editor is becoming a writer who critiques and a reviewer who is critiqued.

At this stage of life, moving toward the creative side of the writing world is beginning to feel liberating. And doing it in an environment where people care as much about others’ work as they do their own (well, almost) is truly enjoyable. If any of my stories ever make their way from my head into others’ hands, that will be the ultimate critique—and proof that writing isn’t necessarily a lonely enterprise.