Recently, I received this request for an opinion from a fellow creative writer, who needed help in settling a family dispute over parts of speech—some words don’t seem to fit into the basic eight (noun, verb, adjective, adverb, pronoun, preposition, conjunction, interjection).

Thinking about it now, my opinion is that it is neither. I think it may be one of those weird categories that I was taught in high school, but never really understood. I am requesting your editorial opinion.

How’s this for family harmony: you’re all right (to some extent)! The discussion of parts of speech can get pretty complicated—but as a way to settle a dinner-table discussion, what follows is probably all you need.

“Speeding” often functions as a type of noun that falls into that “weird category” you mentioned: gerund—a noun formed from an “–ing” verb. A gerund is also called a “verbal noun.”

Extra tip: A gerund is one type of “verbal”—a word that is formed from a verb, but functions as another part of speech. There are three types of verbals: gerunds (“speeding”), participles (“is speeding”), and infinitives (“to speed”). Below, we’ll look at the first two types, which pertain to your question.

Because a gerund, or verbal noun, functions as a noun, it behaves as a noun ordinarily would in sentence construction—meaning, it can take the position of subject, direct object, subject complement, and object of a preposition.

Speeding is an unsafe practice.

Here, “speeding” is a gerund, or verbal noun, indicating the type of practice being discussed. The –ing form gives it away; but if you look closer, you’ll see that as a verbal form, “speeding” retains the sense of action while maintaining its status as a thing.

Extra tip: When one thing is essentially the same as another thing in a sentence, they are known as “appositives”: “speeding” = “practice,” and more specifically an “unsafe practice.”

Now, since I mentioned that “speeding” tell us what type of practice we’re talking about in the above sentence, you may be thinking that the word “unsafe,” an adjective, fulfills that role. Well, it does—but here’s the wrinkle. Above, I said that “speeding” and “unsafe practice” were appositives, or terms that mean the same thing. In this specific sentence, “unsafe practice” is a noun phrase—made up of an adjective and a noun—that cannot be pulled apart and retain the sense of the sentence. In other words, if we remove the adjective, we are left with a different statement, one that sounds incomplete: “Speeding is a practice.”

This brings us back to the discussion of other verbal forms. “Speeding” can also be a form of gerund that acts like an adjective:

I can’t even count all his speeding tickets.

The gerund “speeding” modifies “tickets”—it tells us what kind of tickets they are, not that the tickets are moving fast! So it does, indeed, behave like an adjective.

Speeding is an unsafe driving practice.

As we know, the gerund “speeding” is an appositive of the noun phrase “unsafe practice,” made up of an adjective and a noun:

But in our example sentence, we have a second modifier—the second gerund, “driving”—a word that tells us what kind of practice is unsafe:

Therefore, in this specific sentence, “unsafe driving practice” is the complete noun phrase, made up of an adverb, a verbal adjective, and a noun. Yes, the construction of this sentence means we have yet another part of speech: because we have two modifiers in the noun phrase, “unsafe” is actually an adverb modifying the verbal adjective “driving” (but our focus is on verbals, so don’t worry too much about this for now):

Extra tip: When a non-gerund form of a noun (no –ing) functions as an adjective, it’s called an “attributive.” For example, ““speeders rehab group” is correct without an apostrophe because the attributive noun “speeders” defines the type of rehab group—the rehab group isn’t owned by the speeders, so no apostrophe is needed to make it possessive.

Extra extra tip: The infinitive form (“to speed”) is also a verbal, one that can function as a noun (“I love to speed”), adjective (“I am one to speed”), or adverb (“I can’t wait to speed again”).

“Speeding” can also function as a participle, another type of “verbal.”

He is speeding again as usual.

This verbal phrase, “is speeding,” indicates an action that is being performed right now. Without the “is,” however, “speeding” cannot function as a verb—but, as we now know, only as a gerund. 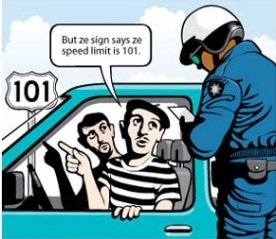 So, the short answer to your question is:

– When used to describe an action, and not the action itself, “speeding” is a gerund or verbal noun.

Hope this helps at the next family gathering!